Showing posts from August, 2009
Show all

The Web of Social Bookmarking 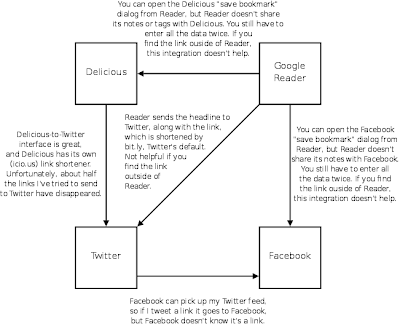 At its very core, linking websites together is what makes the web the web. I've had my own website since 1996, and like many people, we all had a page dedicated to our favorite links. In 2001, my friend Brian Gongol (and he certainly wasn't alone) went a step further and provided not just a list of links, but rather a stream of updates, whether they be sites of interest or news of the day, each complete with Gongol's thoughtful commentary. I liked the idea, and with my adoption of Delicious in 2002, I had an easy way to tag, catalog, and comment on links. Almost 900 links later, I'm still using Delicious, but I'm not sure if anybody has noticed. My RSS feed is picked up by FriendFeed , but not many more people pay attention to it. So what are people paying attention to? Twitter and Facebook , that's what. They each provide audiences I'd like to share with, but neither are good enough to make me leave Delicious behind. Throw Google Reader (my favorite
Read more

On to the University of Colorado at Boulder!

- August 18, 2009
It's back to school time again, and this year I'll be returning as a student instead of a teacher. While the decision seemed sudden, this has been in the works ever since I left UNI. I was so influenced there by Dr. Bonnie Litwiller, my academic advisor, and Dr. Ed Rathmell, my thesis advisor, that I knew someday I'd want to go to graduate school and pursue higher degrees in math education. But first, for reasons of experience and credibility, I went to Colorado to teach, learn, and explore. Six years later, the time has come to pursue that earlier goal. After evaluating some of the best math education programs in the country, last week I visited CU-Boulder and met with Dr. David Webb. He was extremely generous with his time, working with me for over two hours, and by the time I left we had a plan and any doubts about my decision were gone. Not only is CU-Boulder a great school, it makes sense for me academically, socially, and geographically. So I'm a student a
Read more
More posts