Showing posts from June, 2016
Show all

Ten years ago yesterday I scrobbled my first tracks to last.fm . What's scrobbling? On last.fm, scrobbling refers to automatic music track logging to the internet. For me, uploading a record of my music listening habits was my first real experience with "Web 2.0." Remember Web 2.0? It referred to websites of user-generated content that enabled virtual communities and interoperability. Now such sites are too ubiquitous on the web to warrant a special designation — they're just the web . But that wasn't true in 2006, and even though I'd been putting content on the internet since 1996, at the time it was enough to make me a little nervous. What did these strangers want with my data, and what was in it for me? Ten years and 24,941 scrobbles later, I have my answer: I have a really cool record of all the music I've listened to the past 10 years! Well, not "all," technically: I've certainly listened to music in places and on devices that didn'
Location: Boulder, CO, USA
Read more 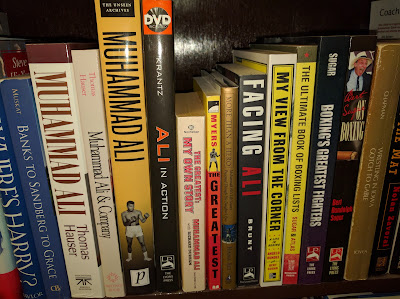 Muhammad Ali died late last night. To say I saw this coming wouldn't tell the whole story. Several times, over the past few years, I found myself suddenly struck with the thought, "Ali will be gone soon." It was the kind of thought that hit me as I lie in bed, unable to sleep, but unable to focus my thoughts. I wasn't seeing the future, and I'm not particularly sentimental about the dead. But the fact that my subconscious would do this to me should give you an idea of what Muhammad Ali means to me. Early Memories As a young boy, I had a few pieces of sports equipment: a bicycle, an old baseball glove passed down from my dad, and a pair of boxing gloves, which I used to hit a heavy bag fashioned from my dad's old Air Force duffle bag. My interest in boxing was initially driven by the Rocky movies, but I remember the first Ali fight I ever saw: an ESPN replay of the first Ali-Norton fight, from March 31, 1973. I'm going to guess I was 11 or 12 years old w
Location: Boulder, CO, USA
Read more
More posts