- May 09, 2011
I really don't get excited about the coming and going of school years. In fact, the end of a spring semester always makes me a bit sad. Teachers and students are working at their peak (or their limit), showing off all that they've learned and accomplished and then it just stops and suddenly it's summer. My transition into summer will be smooth, as I'm still working for my advisor and I'll be taking at least one class in July. But I suppose getting this far is an accomplishment in itself. I don't know how much longer it will take for me to finish my doctoral program, but I know I'm now one year closer.

Now that we first-year students have some breathing room, my friend Jackie and I headed out yesterday for a photography excursion. Our destination was Red Rocks Park and Amphitheater, located west of Denver near Morrison at the edge of the Rocky Mountain foothills. Red Rocks is, by almost all accounts, the best natural amphitheater in the country, if not one of the best in the world. 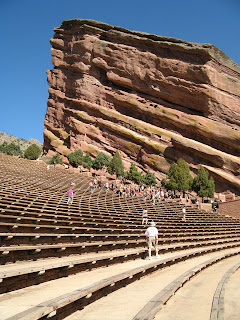 Being a Sunday morning, there were plenty of tourists around and a lot of people running the stairs for exercise. We spent some time taking pictures, doing some people watching, and checking out the welcome center/museum before finding a trail for a short hike. We opted for a short, 1.4 mile loop that starts and ends at the Trading Post below the theater. The weather was warm and the sun was nearing summer intensity, so we kept it pretty casual as we circled the loop. 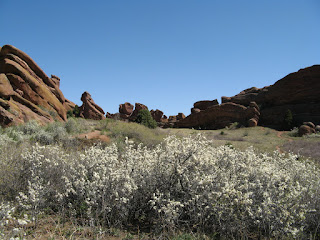 There were a lot of families with small children out enjoying the trail. Typically when I consider getting out in Colorado, I usually feel like I have to decide between (a) the natural outdoors or (b) the built environment. Red Rocks is a nice balance of both, and even with the crowds it never felt crowded. It was just a nice day with a lot of nice people out to enjoy Mother's Day.

We left Red Rocks and headed uphill to Evergreen. Even though I've driven up I-70 countless times and up Highway 285 many times more, I'd never been to Evergreen. We stopped for lunch at the Lakeside Cafe and made a fortunate wrong turn out of the parking lot that led us to some nice creekside scenery and some pretty spectacular homes. One would best be described as a castle, and I'm pretty sure it's the first thing Jackie is going to buy when she digs the loose change out from between her couch cushions.

We backtracked and got back on the "Lariat Loop," headed towards I-70 and east towards Denver. We decided to checkout Lookout Mountain, final resting spot of William "Buffalo Bill" Cody. If you're there to see the grave, by all means, go see it first and then take in the other attractions like the museum and gift shop. Jackie and I went to the gift shop first. Jackie described it as "ghetto" and it did seem to be filled with about every piece of plastic crap that could be hawked as a souvenir. 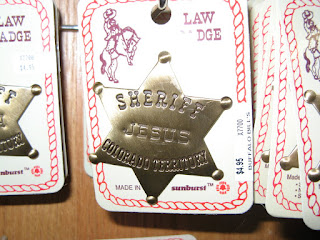 In the wake of the gift shop experience, it's rather hard to decide what to think when you find yourself actually standing next to Buffalo Bill's grave. I'm not sure it's what Bill had in mind when he asked to be buried up there, but it is what it is. Next to the gift shop is a museum. Jackie and I decided to check it out. To celebrate Mother's Day they were letting mothers in for free. I paid my $5, but Jackie LIED and told them she was a mother so she wouldn't have to pay. I feel pretty guilty even now for being a witness to such a lack of moral character, but told her I would pay her back by writing about it on my blog. After a year of classes with Jackie I know she's a good person, but as they say, everybody has their price. And if you're talking about Jackie and a small museum, apparently that price is 5 dollars. (And no, Jackie, claiming you're the mother of your cat still isn't good enough!)

I have no doubts William Cody was a charismatic and loved figure in American history, but both Jackie and I were uncomfortable with the museum's portrayal of Buffalo Bill as a lover and protector of both Native Americans and American Bison. Cody might have spoken out against needless buffalo slaughter in the days after he was a hired buffalo hunter, and he might have included Native Americans in his Wild West show and seen them as friends, but Jackie and I just couldn't reconcile that with the fact that it was the killing of both buffalo and Indians that earned Buffalo Bill his fame.

We ended the day driving into the foothills west of Boulder, up into a burn area and to Gross Reservoir, part of the Denver water system. On the way back we took a few last pictures of Boulder at sundown before going home and calling it a day. 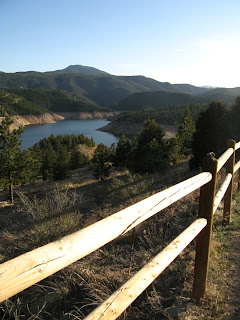