- June 12, 2016
Ten years ago yesterday I scrobbled my first tracks to last.fm. What's scrobbling? On last.fm, scrobbling refers to automatic music track logging to the internet. For me, uploading a record of my music listening habits was my first real experience with "Web 2.0." Remember Web 2.0? It referred to websites of user-generated content that enabled virtual communities and interoperability. Now such sites are too ubiquitous on the web to warrant a special designation — they're just the web. But that wasn't true in 2006, and even though I'd been putting content on the internet since 1996, at the time it was enough to make me a little nervous. What did these strangers want with my data, and what was in it for me?

Ten years and 24,941 scrobbles later, I have my answer: I have a really cool record of all the music I've listened to the past 10 years! Well, not "all," technically: I've certainly listened to music in places and on devices that didn't have a last.fm audioscrobbler plugin. But I have tracked the vast majority of all music I've listened to at my computer (first with Amarok, then Clementine, then Google Music), on my smartphones, and on my home theater PC. Listening to 25,000 tracks over 10 years means averaging about 6-7 tracks per day, every day.

For many years I said in my last.fm profile, "My favorite instrument may be the female voice. Boys with guitars rarely impress me. Bass is often better hummed, not thumped." With that in mind, the artists I've listened to most shouldn't surprise you:

I've been a Tori Amos fan ever since seeing her on Letterman promoting Under the Pink in 1994, so I've had a lot of opportunities to listen to her. It helps that she's steadily put out new music over the 20+ years since. I've been a fan of Sia since 2001 when she was doing vocals for some Zero 7 songs. I've only been listening to Morcheeba and Skye Edwards for the past year or so, but I've caught up quickly. How did I miss them until so recently? 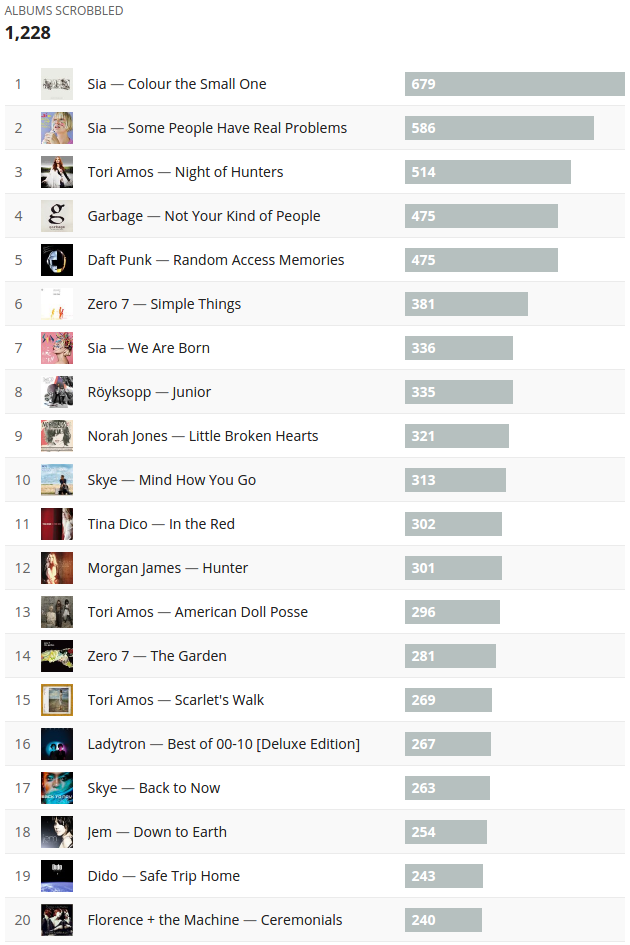 Sia takes the top two spots, and I have all the data I need to make "I listened to her before it was cool" brags. Tori's Night of Hunters album was the kind of album that begged me to listen to in its entirety, playing in the background while I worked, so it got a lot of plays in a relatively short amount of time. 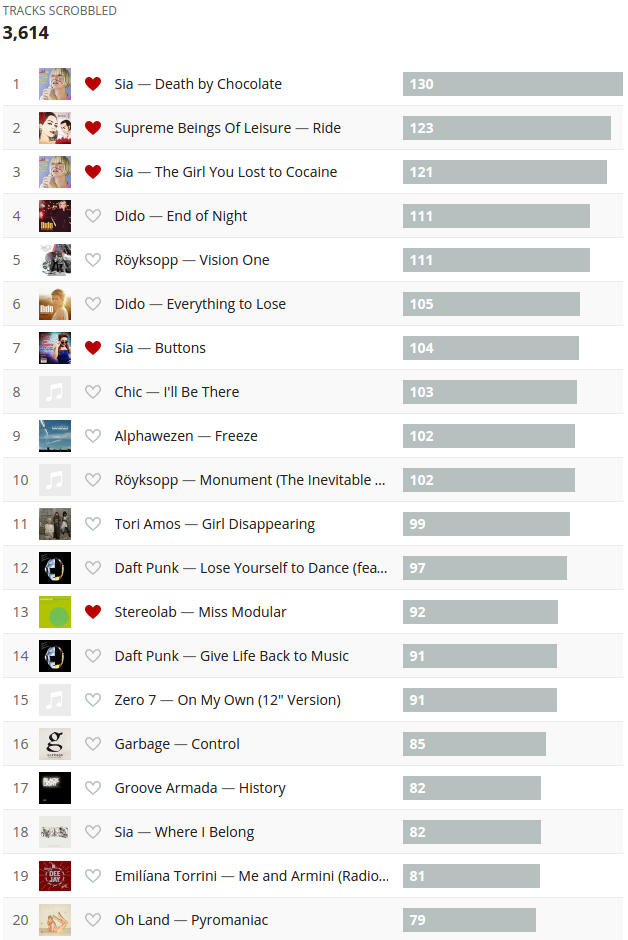 You see that I've only scrobbled 3,614 total tracks, which means I've listened to each of those tracks an average of 7 times. Except here an average doesn't tell a very accurate story, as I'm not shy about listening to a song I like over, and over, and over again. Number 8 above, Chic's I'll Be There, is a good example — I probably listened to it 80-90 times in the course of a week or two, leaving it on repeat as I worked on writing a paper. You might think that after listening to these songs so many times I'd have the lyrics memorized, but you'd be wrong. I might know some, but usually I'm not paying attention to the words. I pay more attention to the sounds and how they work together. Case in point, which I learned from last.fm: At one point long ago I noticed I'd listened to Stereolab's Miss Modular 37 times, making it one of my most listened-to tracks. It was a song from a compilation album and I didn't know anything about the group, so I decided to look them up. Only when I read about the band did I realize that Miss Modular is sung in French, not English. I'd never bothered to notice, and you can see I've listened to it many more times since.

So that's 10 years on last.fm and 10 years contributing to a Web 2.0 service. Honestly, it's luck that I chose a service that's still around after 10 years. Last.fm has changed hands in that time, and variously emphasized music recommendations, streaming radio, live concert promotions, and being a social network. I've mostly enjoyed the statistics, and I'm glad that feature of the site is still going strong.
entertainment music web2.0
Location: Boulder, CO, USA